First off, be very careful making this recipe.  Not that you would have immediate effects…I’m thinking more of the next morning when you attempt to put contacts in your eyes after cleaning five poblano peppers before roasting them in the oven the night before, even after washing your hands in copious amounts of liquid dish detergent with super hot water several times.  That is NOT enough to remove the offending oils.  I'm just saying that you might want to take precautions so that it doesn’t feel like you are roasting your eyes in the oven, instead of poblano peppers, with searing skewers jabbing at them the whole time, only to realize that you need to take the contaminated contact out of your eye which means more hot-pokers-roasting-skewer sensations.  You don’t want that kind of dilemma on your hands before your first cup of coffee in the morning.  Trust me on this one.

The poblanos were hotter than I expected.  Jason LOVED them, Riley enjoyed them, I couldn’t eat more than one and Ethan ate the stuffing out of one and had to stop.  That is what happens when I get real poblanos, not commercially grown ones.  These bad boys were fabulously zippy, spicy and yummy, in small batches for us heat-whimps.  Next time I make a tray of these I will make half with red bell peppers instead so Ethan and I can enjoy the meal as much as everyone else.


(I think I got this out of Real Simple, but I don’t know…all I know is it isn’t a Kim original.)

Stir after 5 minutes.  Vegetables are done when tender and slightly charred.

Spread half of this sauce in a 9x13 pan and place the roasted poblano halves on top with the cut side up.


To prepare the stuffing, heat

in a heavy bottomed pot.  Once boiling add gradually, while stirring

Reduce temperature to a simmer and stir frequently as polenta cooks for 10-15 minutes.  When thickened and cooked through, stir in

Stuff the peppers with the polenta mixture.  Top with remaining sauce and bake in a 400 degree oven for 10 minutes.

Hearty enough for a meal, pretty enough to serve to guests!  By changing the size of pepper these could be transformed into great appetizers.
Posted by Anonymous at 9:50 AM 1 comment:

As promised, here is the recipe for the Baked Sungold Tomatoes.  I have to admit, I pop Sungolds into my mouth like candy so it is amazing that I ever have any left to use in recipes.  This recipe is adapted from Faith Heller Willinger's Adventures of an Italian Food Lover. 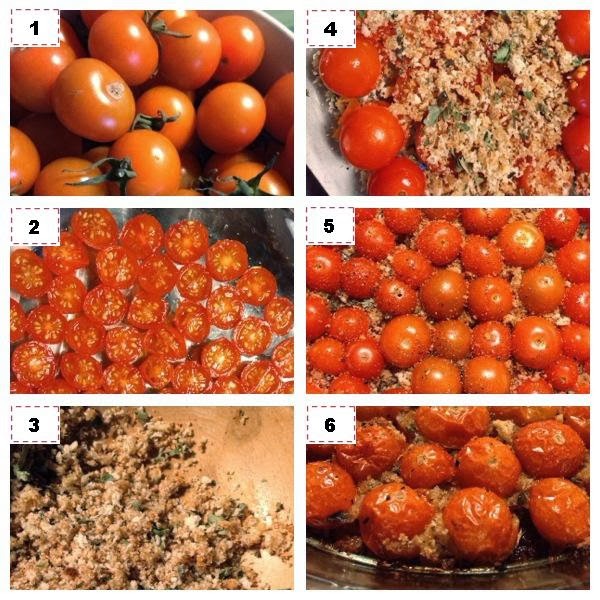 1 Tbsp extra virgin olive oil
40-46 Sungold tomatoes (depending on size)
2 Tbsp fresh oregano, finely chopped (1 tbs dried can be substituted)
4 garlic cloves, minced
¼ cup plain dry bread crumbs
1½ tsp Coastal California Fennel Pollen Rub
Fine sea salt
Freshly ground black pepper
1 Tbsp fresh flat-leaf parsley or oregano, roughly chopped for garnish (optional)
Preheat the oven to 400°F. Drizzle ½ tbsp of the olive oil in the bottom of a 9-inch standard glass or ceramic pie dish.
Cut the tomatoes in half cross-wise (not through the stem end). Place half of the Sungold tomato halves, split side up, into the pie plate, arranging them so they remain upright. (image 1-2)
In a small bowl mix together the oregano, garlic, Coastal California Fennel Pollen Rub and bread crumbs. (image 3)
Sprinkle the tomatoes with the bread crumb mixture. Season with salt and pepper. (image 4)
Top with the remaining tomato halves, rounded side up, to look like whole tomatoes again. Drizzle the remaining olive oil over the tomatoes. (image 5)
Bake for 25-30 minutes or until lightly browned. Serve hot, warm, or at room temperature, garnished with a bit of chopped parsley or oregano. (image 6)

NOTE:  The following ingredients are from StPete.LocallyGrown.Net:

Market Customer Tracy Carnevalini is an ardent kitchen chef and her weekly orders are large and varied, just chock full of colorful vegetables and hearty greens. This week she forwarded me these lovely photographs that provided great ideas on how to use sungold tomatoes IF you don't eat all of them raw the minute we deliver them.  Says Tracy: "This is one of the many delicious ways I use my Sungolds!  I think I may have even gotten the Brussels Sprouts from SPLG, but without going back through all my orders, I am not sure. I do know that when I got them I blanched and froze some. Took some out today and served them with Spaghetti Squash (SPLG) and Baked Sungold Tomatoes (SPLG)!  It was a delicious meal! "  A baked sungold recipe is on its way and Tracy says it's very easy and makes a great side dish for other meals. 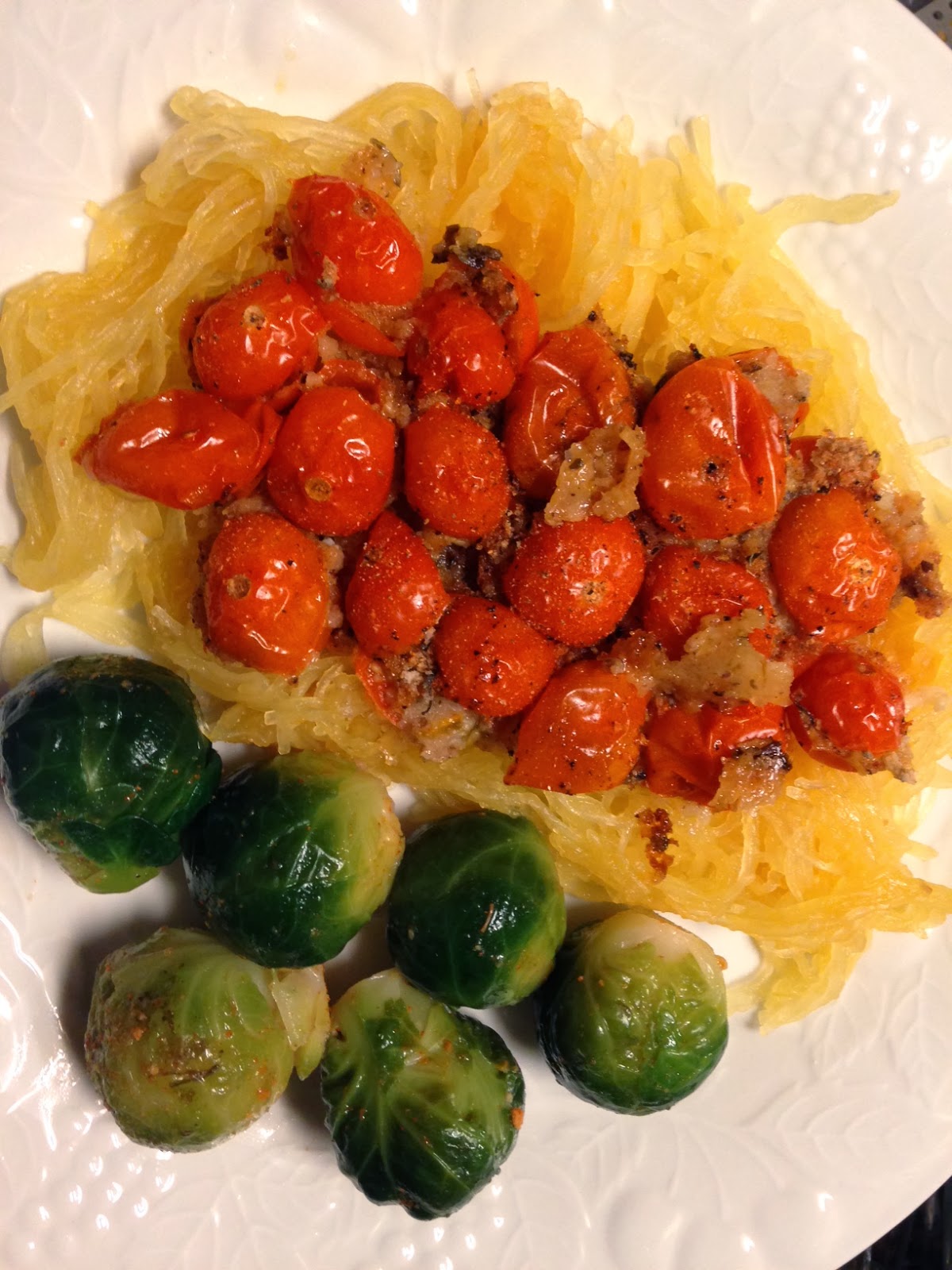 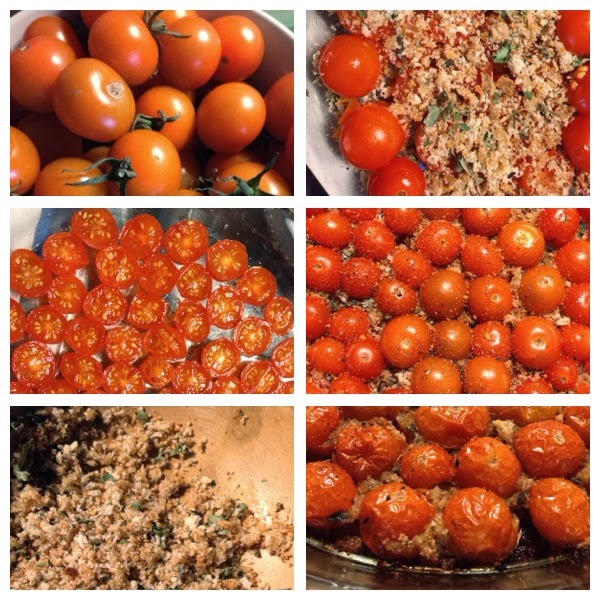